Shifting demands in PPE have caused queries for “KN95” to push their way into the Top 10 Searched Promotional Items – January 2022.

The rest of the Top 10 searches, according to just-released data from ASI, finds “pens” occupying the top spot for the 13th consecutive month. Traditional promo products such as water bottles, tumblers, mugs and tote bags continue to dominate the top searches. The Top 10 remained largely the same between December and January, though “blankets” fell from the list as distributors and end-buyers looked ahead to warmer weather. “Koozie” jumped to eighth in preparation for spring/summer outdoor events. 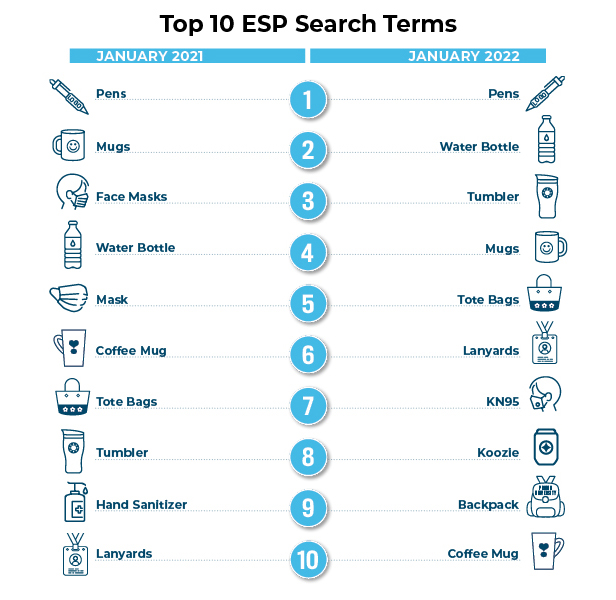 Meanwhile, “KN95” ranked seventh in January after a month-to-month rise of 1,067%. It marks the end of traditional promo products’ three-month-long stranglehold on the Top 10 rankings. The jump follows the rise of the omicron variant of COVID and the Centers for Disease Control and Prevention’s (CDC) updated guidance on masks in January, which states that N95 and KN95 masks offer the best protection. Suppliers and distributors confirmed that they saw a marked increase in demand in the days that followed.

The significant month-to-month search surge for “KN95” in January was accompanied by a 525% rise for “face masks with logo,” a 408% rise for “N95 mask” and a 224% rise for “covid tests,” the first time in which that term ranked on the list of largest increases. Meanwhile, searches related to outdoor events also rose, signaling that customers are ready to get back to some normalcy, albeit with health measures in place. Queries for “golf” increased 245% month-over-month, along with a 193% rise for “golf towel” and 155% for “golf balls.”

“Business is up, traditional promo is on the rise and spring is coming,” says Nate Kucsma, executive director of research and corporate marketing at ASI. “Things are definitely looking up. Golf searches grew dramatically in January as warmer weather is on the horizon, and it’s clear distributors are heeding the advice to order early. Fore!”

Compared to January 2021, the searches that saw the largest climbs looked much the same, including “KN95,” “N95 mask” and “face mask with logo.” Athletic event items, such as “golf” (154%), “basketball” (124%) and “stadium cups” (121%), were also in high demand this year. “COVID test” didn’t make this year-over-year list because there were no searches for the product at this time last year. 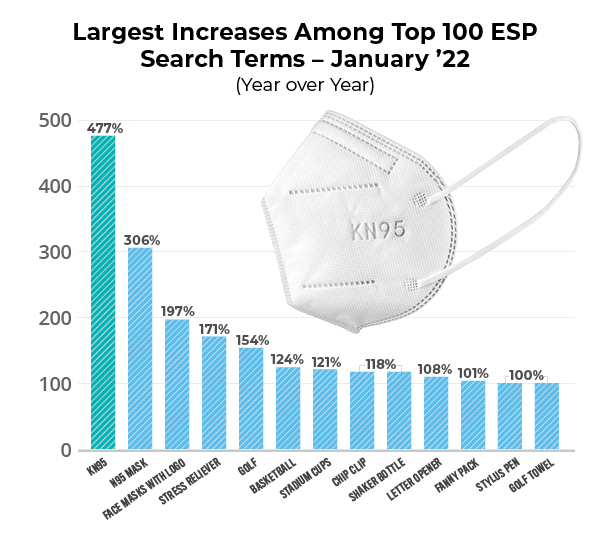 Meanwhile, the terms that saw the largest decreases in search frequency between December and January were “touchscreen gloves” (down 51% as distributors look ahead to spring weather) and “wall calendars” (down 46% as new year promotions wrapped up). “Charcuterie board” also fell 43% after the year-end gifting season concluded. 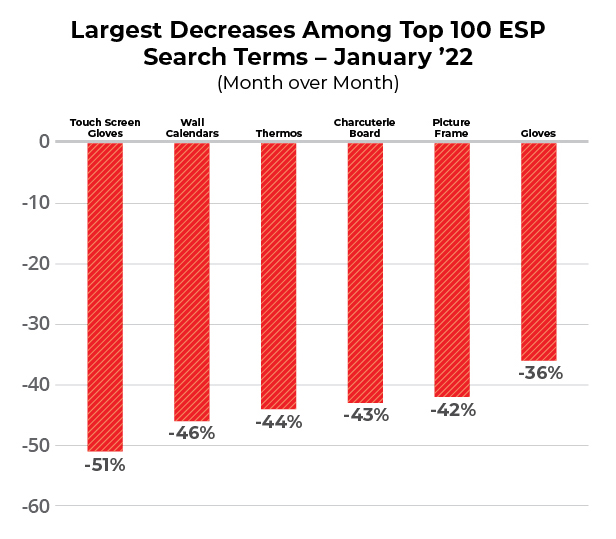 Despite the significant increases in PPE searches, the industry is largely optimistic about the coming months. Data released last week by ASI Market Research found that distributor sales grew 12% in 2021, bringing total industry revenue to $23.2 billion. Nearly three-quarters of distributors say they grew their annual revenue in 2021, moving the industry closer to pre-pandemic numbers.

Report: Not All Organic Cotton Is Actually Organic Green Promos are Hot

Promotional Product Trends to Watch in 2022

Top Product Searches for End of 2021